skip to main | skip to sidebar

In Which My Hiatus is Placed On Hiatus

From Kansas City! Which we drove to! Which takes 12 hours in a car if you DON'T have youngish children with unpredictable toileting needs! Because then it takes 14 hours! And if your tiny little wagon-car is full of Christmas presents to the point of absurdity, it turns out it's really really cramped and uncomfortable!

And, those factors, plus a late start due to caution regarding some snow on the streets, plus a brief stop at the in-laws to pick up MORE Christmas presents and a recalcitrant Shih-Tzu, equals an arrival in Austin at 11:00 P.M, for a grand sum travel time of 15 hours!

Which makes Mags tired! So tired.

And fat. Who the hell opened my mouth and forced all that pie down it for a week? Oh, yes, it was my mother. (And those of you who think I'm joking have not met my mother.)

Anyway, it's very good to be back in the land of reasonable temperatures. Seriously, man; the day we arrived in KC, it got to SIX BELOW. Jeebus, that is NOT O.K..

Here's some snaps fer ya...

1) The YG gets a much-desired Easy Bake Oven from the in-laws in Salado (on the way up to KC): 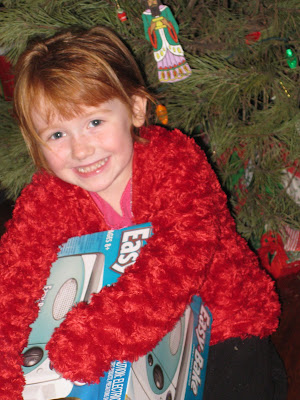 2) The YG at Grandma's house in Kansas City, serenading us with the Karaoke Santa mike with one of her very own Rock And Roll Songs: 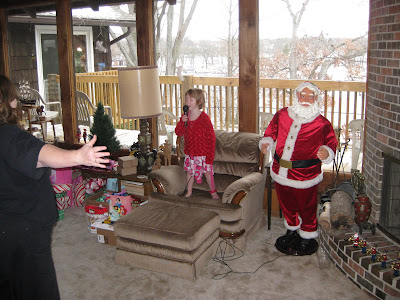 I can't remember if that one was "Parents, You Should Rock Your Kids...At Night" or if it was "Mama, Please Don't Go Away From Me."

3-7) My children were very, very, VERY attached to one another over this trip. 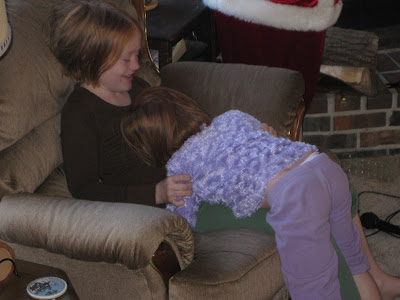 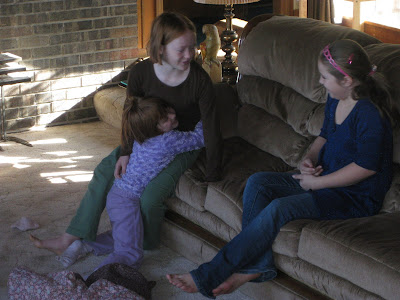 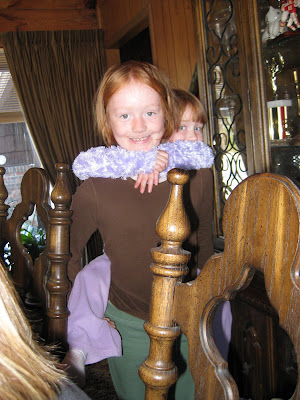 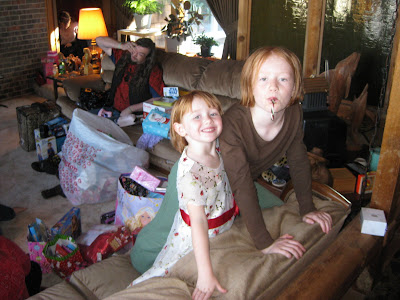 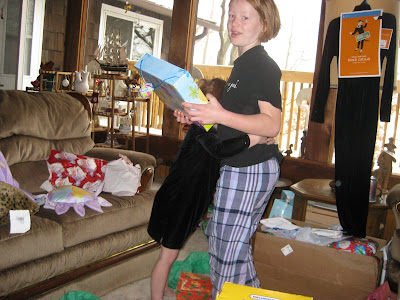 It was somewhat alarming. All I've done for the past three years is separate them, because they clearly could not stand each other. Now, I'm completely confused. What, you suddenly love each other? Kids are FREAKS. 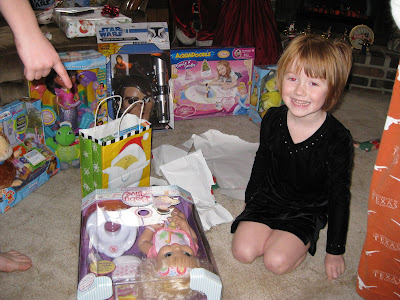 It pees AND poops, people. And I'm sad to say, I SO did not want to get this messy-ass thing for her. However, I did remember HOW MUCH I wanted a Baby Alive when I was little, and how delighted I was when I got one for Christmas. So, relenting happened.

It is SO MUCH mess. Bleah! However, she is absolutely delighted. So, I guess it's all good. 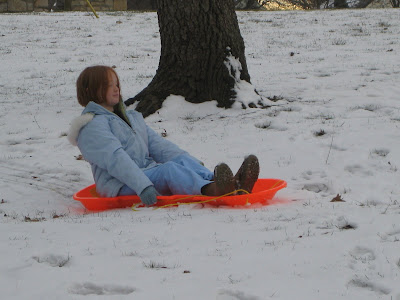 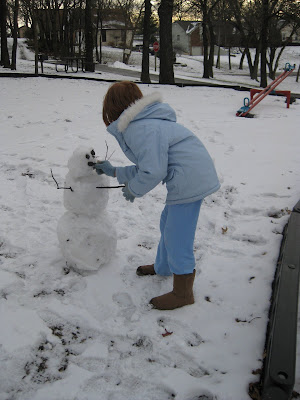 The OG is the only one in these, you will notice. I did ask both girls if they wanted to go play in the snow. Both of them said "Yeah!" very enthusiastically. However, when I told the YG (known in our parts as "Laze-oid,") that she would have to actually put on PANTS to do this, she said, "Oh, never mind." So that is NOT MY FAULT.

11) Eating snowflakes (when the YG could actually be arsed to clothe herself for the day, albeit in a tiger skin catsuit that she wore not only all day THIS day, but nearly two days longer thereafter): 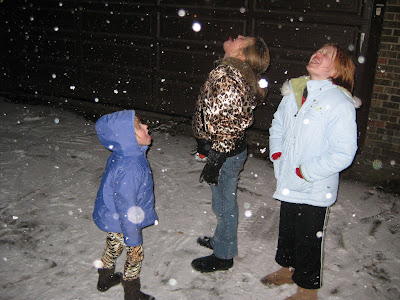 12) Back in the sunshine at the border, whoop: 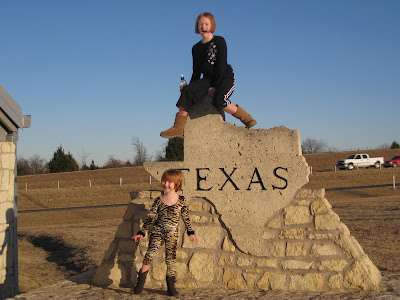 and finally, 13) Humiliating the Shih-Tzu with the elf costume upon our return: 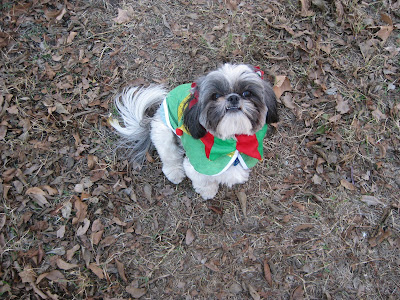 You know what? No pity for her. She's a Shih-Tzu. They DESERVE to be humiliated. (And you know you agree with that statement.)

(It's worth playing all the way through, if you haven't seen it. Thanks to Philly E for the tip!)

Ah, crap. I am just going to have to admit defeat and call my holiday blogging hiatus a bit early this year. There is just Too. Much. To. Do.

I'll get in here when I can, and when the family bears escaping. But I just have NOTHING to put forth right now, and little time to do it, if I did.

It's probably Lack-Of-iPhone Depression. (Is that in the DSM-IV)

Dare I buy these Christmas cards?

I saw this hanging on Shirl's fridge, when we were at his Lights in the Heights party in Houston last night: 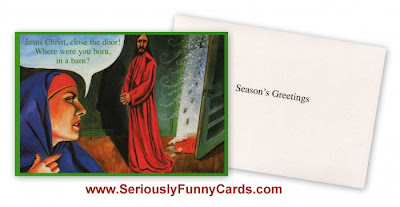 I want them SO BADLY.

The party? Most excellent. Except for the part where I fell through a hole in the porch up to my knee, therein causing my entire right shin to resemble nothing so much as an eggplant. (Was alcohol and/or my inherent clumsiness involved? You bet! However, in fairness, there was also a HOLE IN THE PORCH. )

I'll write about all that tomorrow, if'n I get my six dozen Pignoli cookies made in time.

The weather sucks in Austin tonight, which means I get to play my favorite Austin news-watching game, namely "Turn On All the Broadcasts and Listen to Them Say How Much the Weather Sucks Tonight."

It is a delightful game, I tell you. "On tonight's news...it SUCKS out there! It is SO very sucky! It is cold! And it is raining! And...I JUST FELT SOME SLEET! So let me go stand out on an overpass somewhere in a parka, just to show you how SHITTY this weather is!"

Speaking of shitty, I just came back from seeing "Twilight" with Cristen and some of her work friends. Ah, well, that is perhaps overstating it a bit. I had a lovely time, and was thoroughly entertained, and had awesome company. And, I really re-thought my opinion, as soon as I figured out, about halfway through the movie, that it is actually a COMEDY, and that it was apparently OK that we were laughing hysterically all the way through it. No, I'm serious, it is super-camp. Why I didn't figure that out five minutes into the movie, when there is a straight-from-David-Lynch "logging truck driving past the diner shot," is beyond me.

The books, though, like I said...eh. I've only read the first one. I bought the second, but it's been on my shelf for a while. I've started The Brief Wondrous Life of Oscar Wao, and I am totally immersed in it. Good read. Brisk, funny, educational, and has mad snaps to the sci-fi geek within me.

Work has been reasonably stressful lately. Usually is this time of year, no different than usual. Actually, it might even be somewhat less than in prior Decembers; I've gotten a lot of my work done, and have only a few looong meetings left to attend before my days off around Christmas. Three. No, four. No, shit, five. But, hey, it's been worse.

Holiday planning is afoot. Family time is planned, presents are mostly purchased. Not big pickings this year. No flatscreen for me; I'm sitting on my flatscreen TV right now, which is to say I'm sitting on my new couch, which must take the place of said theoretical TV for the time being. Oh, and I'll soon be receiving my new washer and dryer, bought on sale yesterday, to replace the only five-years-old washer and dryer set from SuckAss Sears that no longer, quote, "washes," or "dries" my clothing. So, there, too, goes more disposable income. What's next, mechanical gods, my car?*

Spelling and punctuation hers.

It starts out with a preface...we in the Mags household are nothing, if not anxious:

Dear Mama,
I have some expensive things on this list. so if you come over one. Just. Cross. it. out. Like this (X).

The next page contained the meat of the piece, which was diligently ranked (although not ordered; we must have a time in the punishment closet for that one) for me:

and the second page contained the OG's helpful reporting for the YG, as of yet unable to compose a comprehensive list on her own:

As you can see, Christmas will be a joyous affair at our house, with the OG opening her $4000 worth of mind-melting gaming technology, while her younger sister revels in her treasured heist of black pants and ketchup.

Harold and Kumar, plus How I Met Your Mother, plus Dr. Horrible's Singalong Blog, equals some Mags-n-Neil bliss. (And did you see him shirtless on HIMYM last week? Cripes! He's totally cut, too!)

Am I weird? Does he totally do it for anybody else?

Snaps to Connie, who made me laugh on an otherwise seriously stressful workday. Inconceivable! 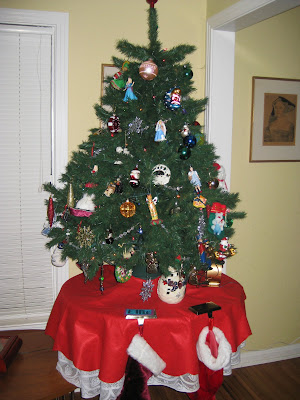 Well, I got our tree up, anyway.

I know, it's sad, my children have to live with a four-foot-tall tree. But, damn it, though she has improved IMMENSELY, I just cannot trust this damn dog with the peeing just yet, ever since the Couch Incident (which turned out well, but still).

Maybe you'll get a big tree to play under next year, chilluns. For this year, y'all can just hang out on the bare hardwood floor, like usual.

Actually, I really want a big shiny silver aluminum tree; the kind with the rotating color light shining up on it. But, I've been pricing those things on Craigslist, and they go for $300 in good condition now. Plus shipping!

I suppose I need to wrap my mind around buying one in like June, so as hopefully to get a more reasonable price, but I am just not that person. I am very in the moment, like I always have been, and have a hard time thinking that way. Like I know people who have their Christmas shopping done already, whereas I only very reluctantly started yesterday. (No, wait, I did buy two cheap Wii games at Target a while back, and stashed them away. Somewhere. See, I am not good at this.)

So, if anyone sees a reasonably-priced aluminum tree for sale somewhere, let me know. I am feeling the serious need for a slow, colored strobelight in my living room.

Mags
Somehow, the disturbed and twisted person I am (and have always been) has ended up to be a sickeningly happy wife, professional, and mother of two. How can I be true to my dark, goth heart, in the face of this horrible irony?

People Who Love Me (Or Who Have At Least Met Me, which is Technically The Same Thing)

Websites of People I Do Not Know, but Aspire to Their Supreme Coolness: